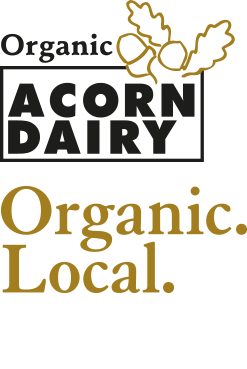 The benefits of going organic

Organic produce is a major growth industry – sales are up consistently year-on-year – as consumers become increasingly interested in the provenance of their food.

But for us at Acorn Dairy, organic isn’t just a fad, or a buzzword – it’s a way of life.

We started the transition from intensive, conventional, commodity milk production to organic farming in 1998, and we haven’t looked back, creating tastier milk from happier cows, without the use of chemicals.

But beyond improved taste, what are the benefits of organic produce, and does it justify the extra cost?

Organic produce uses no artificial pesticides, fertilisers or routine antibiotics (in the case of animals). In our case, this means going back to basics, farming in such a way that we prevent problems occurring in the first place. This year we are transitioning to using ZERO antibiotics.

To improve soil fertility naturally, we grow deep-rooting legumes (red clover and beans) and recycle farmyard manure as compost. The legumes maintain a well aerated, free-draining soil structure, and also provide a natural fertiliser by fixing nitrogen from the air in a form other plants can use.

Compost is produced by mixing air with farmyard manure through a muck spreader two to three times during the cycle. This allows the farmyard manure to heat up, killing off any weed seeds and potentially harmful bacteria.

Better for animals and wildlife

Organic farms have 50 per cent more wildlife than their non organic counterparts, and we’ve certainly noticed a difference.

Since we transferred to organic production, we’ve never seen so many bees, butterflies and birds; so much so that, when we took part in an RSPB study, we were delighted to find that our hedgerows are home to over 86 species of bird- many of which are on the Red List of endangered species.

Sightings of kestrels, skylarks, sparrow hawks, curlews, fieldfares and herons are more commonplace since we converted to organic farming. Encouraging wildlife and increasing the crop diversity is helping nature keep its natural balance.

Our cows, too, are happier and healthier, roaming free and enjoying a diet rich in nutrients. Earlier this year, we received top marks in the Ethical Consumer dairy buying guide, thanks to our commitment to cow welfare – because, as we always say, a happy herd means tastier milk.

As well as often tasting better, organic produce has been shown to bring its own health benefits; in 2014, a team at Newcastle University found organic crops are up to 60 per cent higher in antioxidants than conventionally-grown ones.

In 2016, another Newcastle University study found our milk was higher in terms of fatty acid composition and the concentrations of certain essential minerals and antioxidants; showing milk produced naturally is higher in quality.

We moved to organic production more than 20 years ago, and it’s true to say that the one effect of the improved quality of farming and cow welfare was a reduction in farm output, and increased costs of production.

To combat this, we made the decision to sell directly to the end consumer – you – cutting out the middle men, while retaining realistic, competitive prices for our organic produce, delivered direct to your doorstep or to your business.

To us, organic farming means cows feeding on grass that’s been grown in healthy, chemical-free soils, surrounded by abundant hedges, allowing everyone to benefit: the cows, the wildlife and the humans.